So when you buy old cars, you should expect them to have little issues now and then - especially with a 20 year old porsche. Anyway I noticed the other day when putting the roof up, the passenger side rear window didn't come up. This is a bit of a problem - especially if it's going to rain!

The window switch didn't raise the window, but a lot of noise and clicking could be heard behind the trim panel - this told me the motor was good, but probably the cable in the window regulator was faulty. Some googling revealed plenty of other 996 cabriolets had the same problem - and while some people opted to pay a dealer $$$ to fix it, I figured I can repair it myself.
Ordered a $60 996 rear window regulator cable replacement kit off eBay from the USA which arrived quickly, and got to work! 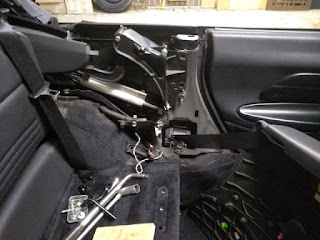 I don't have many pictures of removing the panels to get the glass and regulator out, but I used this guide on Rennlist - https://www.renntech.org/forums/topic/41648-how-to-remove-rear-window-regulator-996-cab/ This was an excellent guide as it had step by step instructions as well as pictures referencing exactly which bolts/screws to remove and in which order. Print these out and keep them with you while you're working on the car - and don't lose any screws or bolts!

One of the difficult bolts to reach was in the convertible hood mechanism - there was no way I could remove it as the hydraulic arm was directly over it. Fortunately I was able to shift the mechanism out of the way just enough to wriggle out the window regulator.

So this is the faulty part once removed from the car - if you look closely the cable has come off the pulley on the right and there's lots of slack in the cable. Once I removed the window motor, I could see the cable had become very frayed and chewed up. 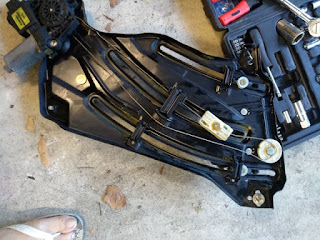 So removing the old damaged cable was easy - putting in the replacement kit was difficult! The replacement cable kit comes with everything you need, including the cables, new pulley and bearing etc - I ended up giving the kit to my local trusted mechanic to drill out the old pulley and install the new pulley and cables, and even he said it was pretty difficult!

This is the window regulator with new cables installed - very tight tension! 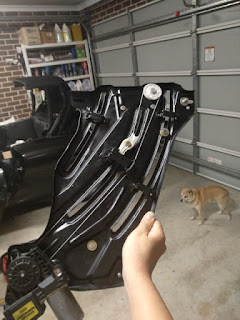 Hooked up the regulator to the control cable and tested it worked 100% before reinstalling everything - re-installation was fast and easy, about 30 minutes - and now I have a fully operational rear window again!
Cost: $60 for replacement cable kit, $40 to my mechanic for replacing pulleys and cables for me (it's possible to DIY as well if you have an angle grinder to remove old bearing and a vice press to install the new one) and about 2 hours to remove regulator, 30 minutes to replace everything. Doing it yourself and getting on the tools? Priceless!

Now... did I mentioned I bought another porsche, that also doesn't work? More updates next time!