so been doing a little maintenance work on the s15 last weekend and today.

last weekend, decided to fit the fujitsubo exhaust i picked up back in march. it was actually originally an R33 skyline exhaust, shortened to fit an S14, and i was fitting it to an s15. 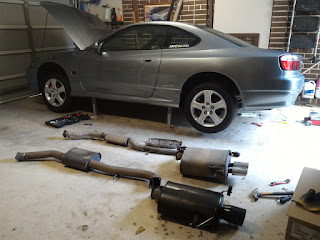 jacked up the car and placed support stands. unbolted the stock catback. was going to do the full turbo back replacement, but had a look at the dump pipe - to my surprise, there was already an aftermarket split dump there. still looks like the factory front pipe though, so i may swap the front section out for a one-piece dump/front pipe I have lying around anyway.

the factory exhaust is a puny little thing, maybe 2" with press bends making big restrictions. good to get rid of it! 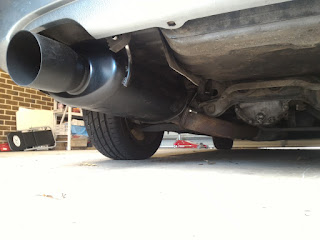 fujitsubo 3" bolted up no problem. new exhaust gaskets and everything lines up perfectly. kinda loud though, but at least it's matt black and (kinda) stealthy. 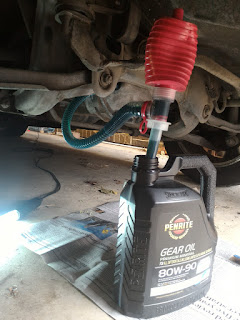 while the exhaust was off, was a good opportunity to replace the rear diff fluid. too. old oil black and muddy, brand new penrite stuff :) 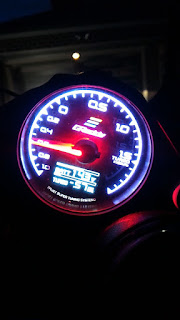 wired up (another) boost gauge - old owner had three gauges on the passenger side of the dash, this one i've now mounted onto a jdm a-pillar. it's a "greddy d/a" gauge replica, but despite this it's a pretty good bit of gear - displays voltage, as well as boost analog and digital. let's see how long it lasts! 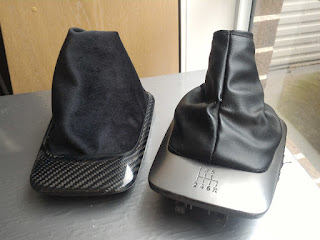 and this morning, knocked up a custom shift boot out of some black velvet to use with a carbon fibre shift surround i bought a while back. sweeet.... and it matches closely with the fabric trim on the driver's recaro seat.

haven't been to the track or motorkhana circuits for a while - need to get out there again!